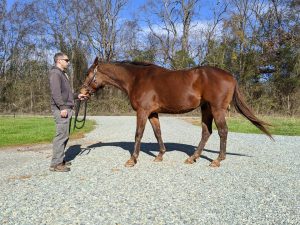 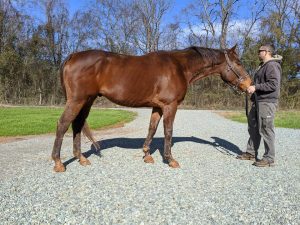 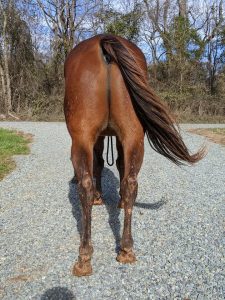 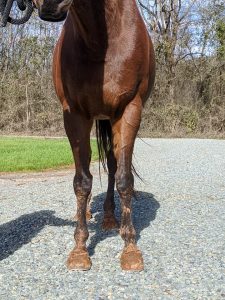 We purchased Kaden as a 3 year old, so this is not a horse we intended on ‘flipping’ (purchase as a sales project).  He’s been my husband’s horse.

He is definitely a big goober.

He is entertaining, he is also athletic with an awesome canter.

He loads and hauls fine.

My husband is pursuing his MBA and is currently active duty Army National Guard (which means Mon – Fri work days, plus one weekend a month).  He hasn’t had a lot of time to pursue riding more than 2 days a week.

While I teach lessons, Kaden gets super bored with beginner / intro level students (90% of my customers) and will resort to game playing (his favorites are “Suck down the lead rope”, “Quick! Chew the reins!” and “Can I eat your clothing”. ) A big focus in my lesson program is in-hand work (not just ground work) and he can smell newbies a mile away.  While he’s great undersaddle he really picks on the newbies while they are doing ground work and work in-hand.

We have re-evaluated our riding expectations (neither one of us have eventing dreams anymore) and have decided to get a horse that is a bit more ‘newbie lesson student’ friendly.

For two years I hauled down to Tamarack Hill Farm / Southern Pines to lesson with Denny Emerson.  Kaden has always been easy to load, haul out by myself. Never any problem getting him settled for our lessons.  The second year I left Kaden down at Tamarack for an intermediate level working student to use when her horse was having issues.

My husband has used Kaden for ‘living history reenactments’ which included firing a cannon and mounted shooting (you could say Kaden is bombproof).

My husband also used Kaden for TREC (ridden orienteering out on the trails, and a judged obstacle course / cross-country course event). We’ve also hauled him out quite a bit just to trail ride for pleasure.

And I have used him to teach lessons on as well as my husband schooling him:

My husband took Kaden to the Moore County Hounds “Try Fox Hunting” clinic, where Kaden got reaaaally excited.  Yes, he did a few cartwheels.  When he spent time down at Tamarack they reported similar behavior when they would encounter the hunt out on the Moss Foundation property. It isn’t fear, or anxiety, it is sheer excitement.  I believe once he gets in to a FULL work program that would settle down, especially given how he settled into the ‘reenactment’ activities very quickly.

Kaden has been sound, healthy and a relatively easy keeper since we’ve owned him.

We did experience hoof deterioration about 2 years ago.  We tried two farriers who didn’t offer much more than typical advise (keep his feet dry, put this product on his hooves, try not to let him stomp at bugs all day).  I found a local mentor who pointed me in the direction of an online mentor / method and I began my journey of learning hoof trimming.  I rehabbed him by pulling his shoes, trimming him every other 2 weeks for a length of time, and he’s been barefoot since then.  He’s growing a healthy hoof capsule including heels.

He eats mixed grass hays (including fescue and bermuda), soaked beet pulp & hay cubes, and aprox 6 pounds of Kalm Ultra daily. He lives out 24/7 because that is all we have.  I’m sure he’d adore having a stall for part of the day.  For the last year he was on the supplement “California Trace” to counter balance the high iron level our water had, in relation to his hoof issues.